A lot of questions have arisen in the last few weeks regarding the new Sorcerers of the Magic Kingdom attraction at the Magic Kingdom park.  (attraction?  yes, attraction.) Will this game be obtrusive to other guests?  Will it take away from the themeing of each land?  Is it worth taking time out of my day?
Lucky for you, dear reader, we've had a chance to play this awesome (and not yet open) game.  SOTMK is a card game /  role playing game, led by the amazing and under utilized Merlin.  In true Disney Hipster fashion, we will leave the really well thought out review to people like Ricky....Sorcerers of the Magic Kingdom Test Review. (via Inside the Magic)  We will gladly express our opinions on the aesthetics of the game however... in a series of WINS and FAILS, both epic and plain. 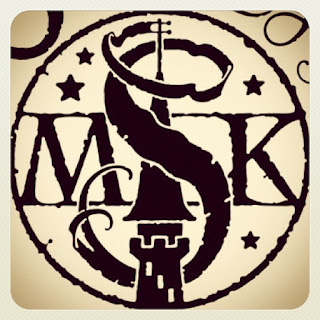 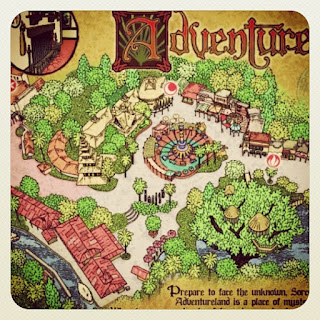 The insignia and the map: EPIC WIN.

One thing that this attraction is NOT bogged down by is poor design.  None of the cheesy, one dimensional, plastic design that was running rampant in WDW for the last two decades.  (Toon Town, Tomorrowland...) Here we have a wonderful cohesion, not only in the design, but in the context of the park.  The Fantasyland expansion will further emphasis the gradual moved toward TEXTURE and wonderfully worn age.  A great example being the Winnie the Pooh queue, which is quite wonderful. 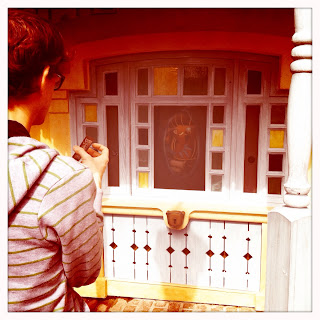 The Portals:  Half Win, Half Fail.

The good news...all of the portals fit nicely with the themeing of each land that they are located in.  With very few exceptions they are also out of the way of the passers by. (the big exception here being Fantasyland, and to a lesser extent Main Street)
The big wins go to Adventureland, where not only are the portals out of the way, but they are also the best designed.  The wonderful light effects at Tartuga Tavern are reason enough to play.  The portals also act as wonderful esoteric tour guides, showing you nooks and crannies otherwise un-explored.  I was astounded by how much of Adventureland I'd never really poked around.
I found the portals in Fantasyland to be the biggest disappointment.  They are hardly themed, unless making them look like a wall of the castle is theming.  Sure, they blend into the surroundings quite well, but when compared to the amazing use of windows in Frontierland, they seem very "blah."   We also found the Fantasyland portals to be too close together, and wished some of them were located further from the central courtyard.  Maybe a little more towards the Mad Tea Party?
Prize for best portal goes to the one next to the shooting gallery in Frontierland.... absolutely perfect. 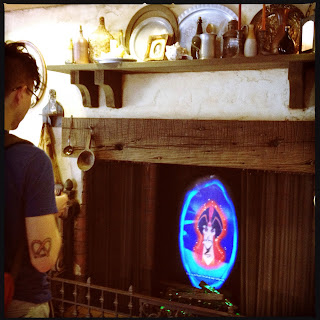 Though this isn't Disney Animated Classic type animation...it is still remarkable.  The character accuracy is pretty flawless, and the integration of more stylized scenes is really terrific. Emperors New Groove has them in abundance, and was probably our favorite style wise.  Sure, there are some corny moments, bordering on bad, but for the most part the animation is pretty great.
Similar thoughts toward the voice acting.  When they get it right, they REALLY get it right.  Whoever is doing Yzma's voice these days is wonderful...perfect salute to the incomparable Eartha Kitt. (may she rest in gay heaven.)
On the flip side, who ever is doing Emperor Cuzco....um, not so much.  Seriously, what is David Spade up to?  Is he so busy with ALL OF HIS A-LIST WORK???!!!!  Come on!  This is Disney World, and you have the chance to be part of a Disney World attraction! 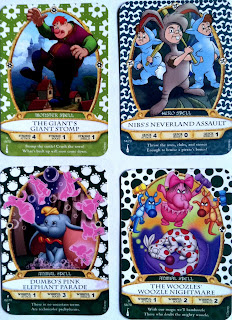 The design of the cards go against everything I was saying before about cohesive design in the game...though they do have the sorcerers crest on the back.  The illustrations tend to be pretty great, but the rest is a jumbled mess.  I do understand that this is out of necessity due to the image recognition technology.  But really?  Do we need the little poem at the bottom?  This is clutter for clutters sake.    The four cards above are some of my favorites (we ended up with 15)  but still carry the chaotic mess theme...

The actions of the cards however are quite wonderful!  They involve a great combination of hand drawn animation and computer animation, and are never quite what you'd expect!   Whether you are playing Dumbo's Pink Elephant Parade (where Dumbo blows a huge pink bubble that explodes) or The Fairy Dogmother's Pumpkin Bash (dozens of thrown pumpkins!!!)  you will definitely be surprised!  Half the fun of this game was seeing what each card brought.

I don't want to get into game play here too much, as the game is still in beta testing...but it really was fantastic!  For those of you familiar with the Magic Kingdom, you will be able to finish all nine levels through the course of a short WDW trip, and it will be worth it.   The good thing being that you can pick up right where you left off last!
Apparently when the game officially opens there will be a more difficult setting. That would be nice for sure, though we saw many children AND adults having a great time playing this easier version.  Another thing we noticed was the amount of boys playing versus girls....probably 4 out of 5 were boys.  So, Disney finally did something right with that demographic.

Have you played SOTMK yet?  Which cards did you get?  Did you find it as amazing as we did?  Let us know!  Email: Disneyhipsters@gmail.com  Twitter: @Disneyhipsters
Posted by Adam and Andrew at Monday, February 06, 2012