The big reason we started the Disney Hipster blog was we found ourselves disagreeing with the majority of the hosts/writers of most of the popular Disney podcasts and blogs (except for the wonderful folks behind the Imagineering Disney blog who are always spot on). It seems like someone is constantly hating on an attraction we love or just never mentioning a must have snack. 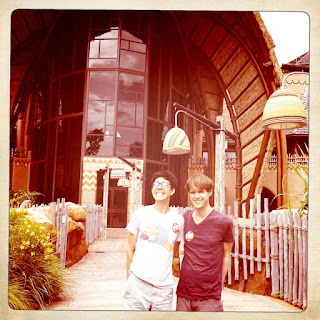 Since starting the blog we've meet lots of wonderful people, and found many people who also share our loves and others who do not. Its a diverse community that gets along so well despite its differences, but I think thats what makes its so wonderful. Even though you might not agree that Pocahontas is the worst animated classic, we love you anyway.

Most of the time we just find out that people don't get to spend as much time in the parks as we have  for one reason or another. We also considered that maybe people just haven't looked closely enough at these things or just never noticed them at all. Either way, next time you take a journey to the World, slow down take a closer look at what we consider to be the Top 10 underrated things at Disney World. 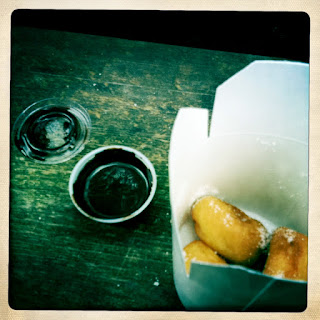 The one thing people really obsess over are the snacks. We do love many of the often mentioned classics such as  Zebra Domes,  Mickey's Premium or School Bread, yet we'd never heard anyone talk about the Mini Doughnuts. These can only be found in Typhoon Lagoon and Blizzard Beach as far as I know. I'll begin by admitting we just started going to the waterparks this year and we love them, but we love the Mini Doughnuts even more. I couldn't resist them when I saw the little machine churning out the little golden friend dough rings after an exhausting ride on Crush 'n' Gusher and the lazy river. Upon ordering we also discovered you can also get dipping sauces: Chocolate, Raspberry and White Chocolate! We've had the Chocolate and Raspberry. Both are great but we prefer the chocolate.
9. Flights of Wonder

This is not an Animal Kingdom park attraction we miss. You really don't hear many people talk about this but its wonderful. It's not advertised very well and most people walk right by it never knowing it was there. We actually didn't see it until about 2 years ago and now we never miss it. Not only is it super entertaining, but its really educational as well. We highly recommend this especially if you have little ones. They'll love it. Lots of close encounters with awesome birds and the awfully charming host Corey. Sigh.....
8. Winter Summerland 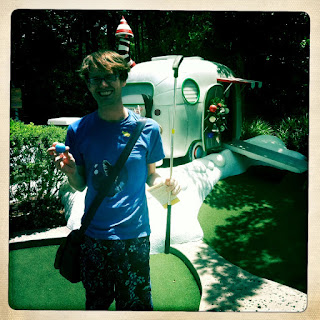 I look like such a goober in this photo!
I know. Its just minigolf, right? Wrong. Its a beautifully themed minigolf course. Its made up of 2 separate courses: One Summer themed, One winter: Both Xmasy. Highly recommended to do between 1 and 2pm while waiting for your after 2pm Water Park annual passes to kick in. Its a great way to set up the equally stupendous blizzard beach. Plus its better that Fantasia Minigolf cause Andrew always beats me on that one. :(
7. Nescafe

I hate coffee. This one is all Andrew. He dreams about it. He talks about it constantly for weeks before a trip. All I know is he explains it as being nothing like coffee, but something all its own and very special. We associate lots of tastes and smells with the parks and this is #1 for him. The first thing he does after we check in, is fill his refillable mug with the stuff. Honorable mention goes to the Gold Peak Unsweetened "Iced Tea". Yum.
6. Electric Water Pagent

This is another confession....we just took the time out to see this for the first time during our stay at the Contemporary in October of this year. OMG. That all I can really say. I can't believe we've never seen this. If your into classic Disney Attractions do not miss this! It makes us sooo happy this still exists. Sit on the beach with a couple of drinks and enjoy!
5. Duffy 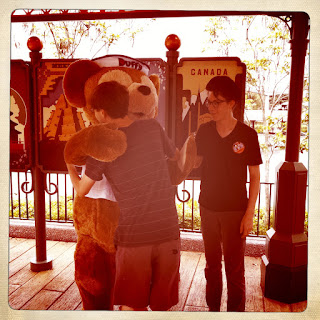 I know, I know. Hes just Disney trying to get people to collect more things (Pins) and part of this is me rooting for the underdog and the other part has to do with my interest in modern Japanese culture. For those who are unaware, Duffy is HUGE in the Japan parks. The is a big difference though, the Duffy outfit quality in the Japanese parks is way better. Maybe one day the American parks will revert back to the unique and well designed merchandise of yesteryear instead of the limited mass produced crap nowadays. If that happened maybe people would start to love him here to. Anyhow, next time you're walking up to World Showcase stop and give duffy a hug and a kiss. You won't be disappointed, I promise.
4. Primeval Whirl 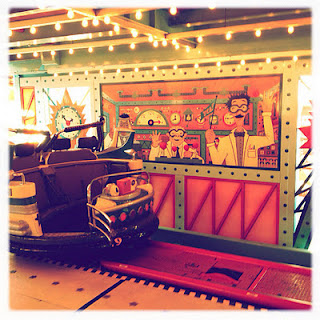 Whats there left to say about this attraction that I haven't already said in a previous post.  People absolutely hate it and it amazes us that they do. It truly is a super fun attraction and has equally great design. Overall its good kitschy fun! I couldn't find the exact quote but I believe an Imagineer or executive said something like, "Do you know how much money it took to make it look so bad?" Amazing.
3. Stacy

Oh Stacy. How we love you. There's nothing better then starting a trip listening to the way Stacy pronounces Summit Plummet. Her excitement is contagious and it really takes some great acting skills to pretend to be that into Mission: Space when we all know its an embarrassment. Now all Disney has to do is actually add a new attraction ever year like they used to so we can get a fresh top 7 must sees every year like we used to. In looking her up, I also discovered she donates lots of money to various animal charities from her Autograph photos (Who is buying those?!?). A++. Her annoying voice really makes us feel at home. Also her last name is Asswad to make it ever better.
2. Animal Kingdom Park

'Shakes head' We just love both Animal Kingdom park. I'm sick of hearing the 1/2 day park thing. There its tons to do. It is one of the best parks to explore. If you only did all of the great attractions (Kilimanjaro Safari, Primeval Whirl, Expedition Everest, Flights of Wonder, Finding Nemo the Musical, Dinosaur and It's Tough to be a Bug) it would take a good chunk of the day. Then add some exploring and you could be there all day. Try the trails that are basically hidden behind the tree of life. Take a walk through the Maharajah Jungle Trek or Pangani Forest Exploration Trail. Take some time and look at all of the crap on the walls at Resturantosaurus. The artistry in the Park is unmatched at any other US disney park currently. Everyone just needs to stop, slow down and take a look around. The design is truly awe inspiring.
1. Sonny Eclipse

Sonny is from Yew Nork on the planet Zork and is married to a gal that really "blows him away" (with her many nostrils) and has the loveliest purple eyes--all 7 of them! Seriously. An Animatronic Alien Lounge Singer that sings original songs and tells awesomely bad jokes in between. Yet no one ever mentions him. This seems right up the alley of the older fans that gush over attractions like horizons who hosts those podcasts I mentioned earlier, but I've never heard of him prior to stumbling upon him during a trip a few years ago. Next time you need to sit down for a few minutes, grab a cookie sundae from Storybook Treats and head over for a few Sonny tunes while you enjoy it.
Honorable Mention:

We had a hard time coming up with this list and ended up settling on things that seem to receive less attention or love. Here were the other things that we considered that didn't make the final list.

What are the underrated things at DisneyWorld that you feel are sometimes overlooked or hated on?
Posted by Adam and Andrew at Monday, November 28, 2011