In 1956 Buena Vista Records was the new kid on the block.  Sure the label had Disney branding and had already established itself a little with soundtracks, but was new to the teen pop genre.  By the time Annette Funicello's first album, Annette came out in 1959 the musical taste of kids was already moving away from sugar coated fluff.   With that said, Buena Vista Records went on to release some of the best teen records of the 60's. 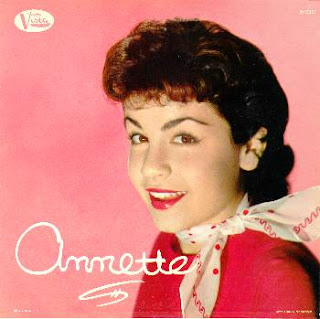 
1959 gave us Annette, the first album from the most popular of Mouseketeers.  All twelve songs from the album were released as singles.  Tall Paul, written by the Sherman Brothers was the most successful of the bunch, charting at number seven.  The song also has the significance of being the first top ten rock and roll single by a female.


This is about the most charming thing I've ever seen.
One of the wonderful things about Annette and most of the teen records released on BVR was subtle diversity in the albums.  Upon first listen they are nothing more than well written pop songs, but after some time invested in listening to them most of the songs display a surprising amount of depth.   Lonely Guitar for instance is just a pretty song when strummed lightly on an episode of Zorro...
Very sweet Annette.
While the album version has a wicked ferocity that you might not pick up on after the first few listens.
Burn baby, burn.
So at the risk of falling into the tropes of  a 27 year old gay man...I love Annette.  This isn't just an amusing album to put on during a party.  This record is filled to the gills with wonderful hit songs as diverse as they could be.  Even the silliest of songs (Jojo the Dogfaced Boy, comes to mind) are very well written pop gems.   Annette is second only to Hayley Mills amazing album, Let's Get Together With Hayley Mills.
Disney has been doing a great job lately at making these records available.  As with most, this album is available on iTunes and totally worth the purchase.
Posted by Adam and Andrew at Monday, October 03, 2011