Anyone notice the influx of Marie merchandise in the parks lately?  Marie is the super adorable, sassy, brat of a kitten from the desperately underrated animated classic The Aristocats.  Truth be told, I understand why some fans dislike the movie.  First of all, it was the first fully post Walt animated movie and that is enough to bum ANYONE out.  It also draws heavily from the most successful animated movie ever, 101 Dalmations in both story and style.   Not to mention that this movie did in fact under perform at the box office, beginning a really dark age for the company. 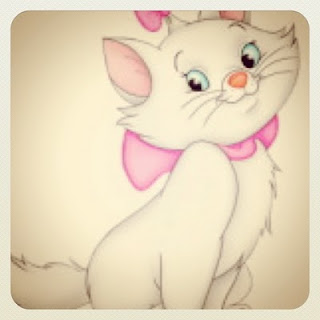 Does this destroy my indie cred, or enhance it?
More after the jump...
I love this movie regardless.  The kitten characters are wonderfully developed, Duchess is extremely caring and lovely, and I genuinely empathize with their mistress.  Even the small parts are filled with exciting lovable characters.  The geese,  Scat Cat,  Frou Frou, and Roquefort fill out this movie nicely. (why doesn't anyone mention Sterling Halloway in his role as Roquefort?  He did a bang up job here.)
The explosion of love for Marie stems from the original hipsters, the Japanese.  Their appreciation for all things cute, fluffy, and weird has spurred a Marie renaissance.   Here in the states however, we get all the leftovers.  Pencil holders, sparkly tee shirts, maybe a pin or two....just enough to keep the Japanese tourists and little girls happy.  We do get ONE OTHER totally amazing thing though... 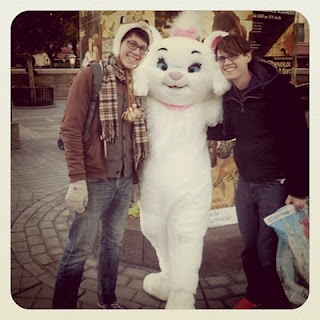 Notice how bundled up we are...this was the infamous "cold" trip.
Marie herself is the cuddliest most darling character in Walt Disney World.  Found in the France pavilion at Epcot, Marie is rarely swamped with people.  Unlike, say, Belle just a few yards away who has a line that rivals Soarin. 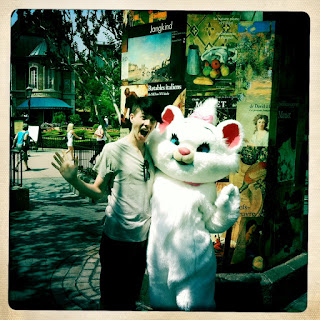 Anyone who character stalks has the ONE SPECIAL CHARACTER who they have to see every trip. Marie is mine, as dorky as it is.   I just want her to crawl into my bed and spoon with me all night...nothing gross...just spoon.

There is a rumor floating around out there that the people who play Marie are always "characters in training."  Does anyone have any information on this? I've asked several cast members who all deny it.   I kind of like to think that its true.
Posted by Adam and Andrew at Tuesday, October 04, 2011