I'm a huge fan of soft serve; therefore you would assume in visiting Disney Parks on an average of 3 x's per year I would ingest tons of Disney branded frozen confections. You would be assuming wrong.

The reason......virtually no Sprinkles in Disney Parks.

I love Sprinkles (Jimmies if you're that kind of person...hmph). 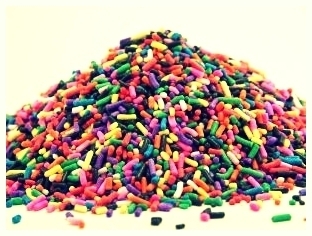 There's something about those barley flavored ultra hydrogenated sticks of wax that makes ice cream worth eating. During my first visits to Disney World, I was horrified each and every time I was denied sprinkles. I've looked everywhere. They do turn up at a few controlled sit down environments, buy none are offered at any quick service that I've ever found. After alot of thought, the only good reason I see for this "Sprinkle Ban" is for sprinkle control.

I do understand the mess issue, but they could easy use those only slightly toxic plastic drip catchers. (See below). Aside from they the only explanation is that they are too cheap or lazy. 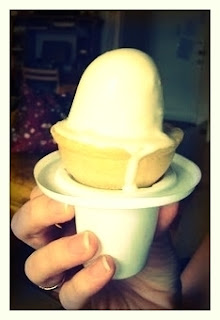 At the end of the day, I don't buy any of these excuses that I am imagining Disney would give. )I should probably just ask them.) Sprinkles would make my in Park experiences that much more Magical! Come on Disney, make it happen.

I've included a list of all the in park locations that have soft serve and DO NOT have sprinkles. (For all you sick people that like topping free ice cream) Leave us a comment if you know any that do or have any ideas to remedy this atrocity. I've been thinking about smuggling in a jar for myself. In fact, lets have a Disney Hipster Smuggled Sprinkle meet up next week!