In Love With Dorothy McGuire.

My mother taught me and my siblings well.  All four of us know the lyrics to The Ugly Bug Ball, we all have our favorite scene from Pete's Dragon, and we could probably recite every witty exchange in Bedknobs and Broomsticks.   My family grew up on OLD Disney movies.  Yes, as a 27 year old I did go and see every new Disney animated film in the 90's...but I lived for the older live action Disney movies.
The cannon of Disney films are composed the quintessential awesome family.  The quirky dad, Fred McMurray.  The dorky older brother, Tommy Kirk. (sigh.)  The cute little brother, Kervin Corcoran.  The smarty pants/ talkative / sweet sister, Hayley Mills.  Then there is Dorothy McGuire...the perfect Disney mother. 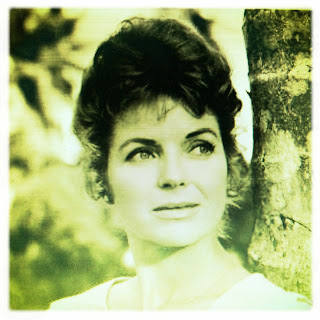 Dorothy McGuire represents everything that I love in an old movie.  She's a stunning and stoic beauty, has an underrated amazing voice, and was effortlessly convincing as an actress.   She wasn't in as many Disney films as the others from the quintessential Disney family...but she is just as important.   I see her on the screen and I just melt.