Clarabelle Cow has been on my radar a lot lately.  Last year Adam was obsessively playing Epic Mickey on wii.  Clarabelle makes several cameos, playing into the whole forgotten characters angle of that game.  She also makes a wonderful appearance in the Frontierland Hoedown. 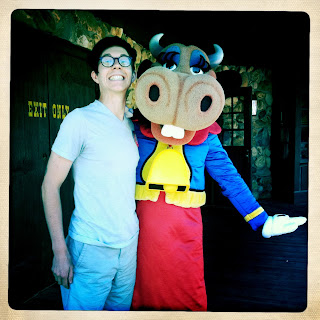 Clarabelle and myself, right before the hoedown.


It saddens me greatly to think of Clarabelle as a forgotten  character.  I prefer to think of her more as an underused  character.  Looking back on her vast body of work Clarabelle is hardly just a supporting background character.  Like most Disney/Iwerks characters she has a surprising amount of depth. The love triangle with Goofy and Horace Horsecollar is of particular interest.

Above all else, Clarabelle is as old as Mickey Mouse himself.  If we, the Disney community, aren't here to help preserve the past then what are we doing?  With that said, I think Clarabelle would be a perfect fit for the DCA reboot. Why focus on Goofy's Flight School, when we could include the silent characters from the 30's?  Include a meet and greet in that area of the park! Or a scheduled meet and greet in Frontierland for that matter...do we always need pioneer Donald?! 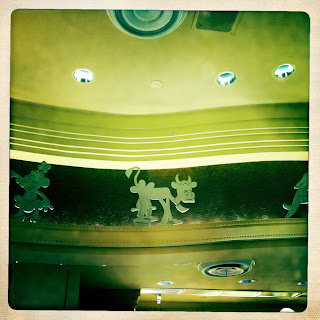 A little bit of love at Hollywood Studios.
I'm pretty sure that Clarabelle is due for a major visibility comeback.  Recently while watching the Frontierland Hoedown it was obvious that most people recognized her.  The fact of the matter is that her she is omnipresent in the Disney universe despite the fact that she is so underused.  The beautiful sharp  lines of her design are classic Ub Iwerks.
Keep on truckin Clarabelle.