I'm in the middle of reading The Illusion of Life, a truly tremendous and necessary book by Frank Thomas and Ollie Johnston.  One of the important aspects of the Disney cartoons of the 1930's is the drive and motivation of the characters actions. 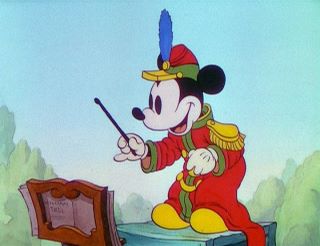 Mickey Mouse in The Band Concert 1935.


more after the jump...
Often times, in early cartoons, other companies would be happy with characters fumbling about from gag to gag.  No reason...just walking around trying to get a laugh.   Disney cartoons were different though.  Mickey and the gang had a reason for everything.  It sounds so much like fundamental story telling, but at a time when animation was still looked upon as a novelty, the STORY usually came second to laughs.

Felix the Cat.  A good example of mischief for mischiefs sake.  Kind of offensive.
The Band Concert is a wonderful example of Disney breaking the animation norm of the time.  Not only is there a story (albeit simple) but Donald Duck and the tornado both act as a catalyst for hilarity.


Take a break from work to watch this....only NSFW if you work in a place where fun is prohibited.
The Band Concert is the inspiration for Mickey's Philharmagic, one of my favorite Fantasyland attractions.  It is also featured in the re-theming of the Silly Symphony Swings at DCA. (though it isnt a silly symphony at all.) 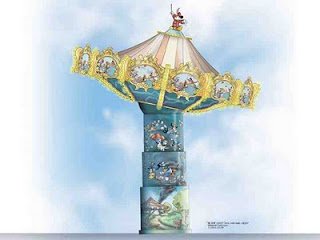 Silly Symphony Swings concept art for DCA.
Anyone who grew up in the 80's and 90's will remember this short being played on the Disney Channel pretty often.  It is one of the few older cartoons that I have vivid memories of (along with The Skeleton Dance!).   It is nice to see it get some vague representation in the parks.  I am very hopeful that we will get something related in new Fantasyland, via the Dumbo area.
Posted by Adam and Andrew at Thursday, September 29, 2011