I'm a pretty big Andrews Sisters fan. I tend to enjoy bad ass women from the 40's in general...but these girls really knock it out of the park. As the leading female act of the time, it made sense that they would collaborate with the Disney company. 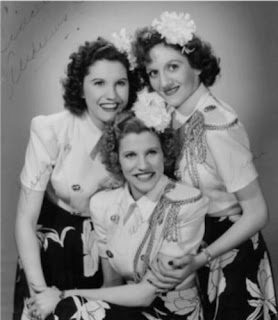 I wish these were my aunties.

They have several wonderful Disney connections, most notably the 1948 short Little Toot which is from the long player Melody Time.


And Johnny Fedora & Alice Bluebonnet from another package film, Make Mine Music.  This one is ridiculously sweet and the song is wonderful.

An overt reference was made toward the Andrews Sisters in the wonderful and under rated Kitchen Kabaret as the Cereal Sisters...but that is long gone.  As far as current in park nods, they still play Rum and Coca Cola near the entrance of Typhoon Lagoon which is very fitting toward the atmosphere of that park.