With the recent refurb/overhaul of The Enchanted Tiki Room, Under New Management  to the superlative Walt Disney's Enchanted Tiki Room one might be concerned with the limited amount of times an attraction can be redone before getting the axe.    We all know the "long" lines at the new attraction will wane in the next few months (weeks?) once the super fans have gotten their fill.  After 13 years of New Managment the crowds were long gone, and the idea that reversing the Iago effect will bring people back is ridiculous. 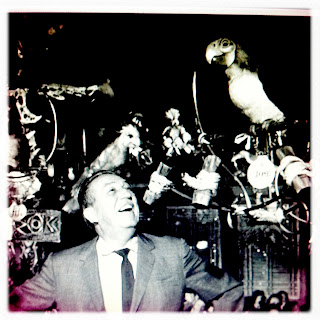 The average park guest could care less about park history, let alone  individual attraction history.   As far as most people are concerned the only thing in Adventureland is the Pirates of the Carribean.  With that said, the Tiki Birds are my personal favorite attraction in Adventureland and third favorite in the Magic Kingdom.   Here are some reasons why it can never go away.

One: The ability to wake up Jose at the beginning of the show.

Two: The Company's long history with all things "Tiki."
Sure, I mentioned that average park guests couldn't care less about park history.  But if there is anything that the company wants,  its continuity with its product.  The birds have the same carefree feel as the Polynesian resort, or say, Annette.

"Tiki" is one of the five tropes of the Disney company.

Three: The destruction of attraction theme songs has to stop somewhere: (soon)

RIP Old Friends:
Its Fun To Be Free
If You Had Wings
Listen To The Land
Tomorrows Child

Four: What else are you going to do with the space?

The space where the Tiki Birds are is roughly the size of the Flying Carpets attraction.  Though that attraction adds a lot to the atmosphere of the land it is hardly innovative, even for an off the shelf carnival ride.  (yes, the spitting camels are nice.)   The only other options would be a very small store (which there already is on the other side of the carpets), a small counter service restaurant (which there is one next door), or a diversion style attraction (we already have Shrunken Neds Junior Jungle Boats.)
Basically Adventureland has everything it needs already. 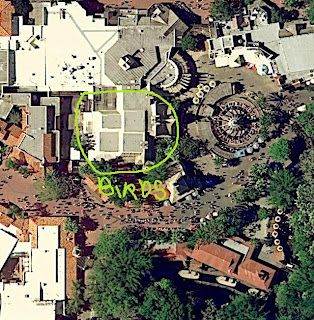 What else could go here?  Nothing.

Rarely are popular movie characters TAKEN OUT of attractions.  Imagineers are smart enough to look at an important old attraction, and realize that the bastardized version  just wasn't working.  The gravity of this decision is amazing and opens up a million opportunities for park improvement.  Maybe, just maybe, we can say goodbye  to Stitch in Tomorrowland?  (I could see this happening in the next few years.)   I take this as an act of humility on the part of the company...a rare and beautiful sight.

This wasn't supposed to be a real blog post....but I love the Tiki Birds very much.  I am super excited to see the new refurbed version in a few weeks.  I hope this attraction is around for a very long time...otherwise I might have to chain myself to it.  Dolewhip in hand.
Posted by Adam and Andrew at Wednesday, August 24, 2011