Adam and I are not big Disney merchandise people.  We don't collect pins.  We don't buy plush.  And for the most part we don't buy anything that can be found throughout the entire resort. In true hipster form we hate the homogenization of the parks.   With that said, we LOVE when there are unique items relevant to the store that they are found in.  World Showcase in general is a great place to start. In addition to there being non-Disney books, snacks, and gifts, there are also nice throwbacks to Disney films related to each country.   Donald for instance...

Donald is seen here with Panchito, the actual Mexican character
from Gran Fiesta Tour, showing him the symbolism of the piñata. 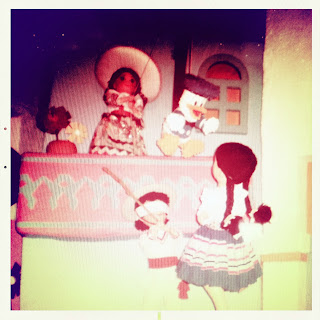 A Donald pinata is included in the 2007 conversion of the Gran Fiesta Tour.
I don't think it's any secret that I tend to favor the underdog attraction.  But I have a specific fondness for the Gran Fiesta Tour.  There is never a line for this attraction...its lively, and colorful, has a catchy song....and I always leave with a huge smile on my face.   I also love the little wink at Mary Blair in the pinata scene.  Brilliant.
One thing was lacking though...merchandise.  I always left the attraction wanting the little paper flags with the Three Caballeros faces on them, and a Donald Duck pinata.   The fact that my favorite scene wasn't represented in merchandise for was extremely disheartening.   Then...finally, a few years ago.... 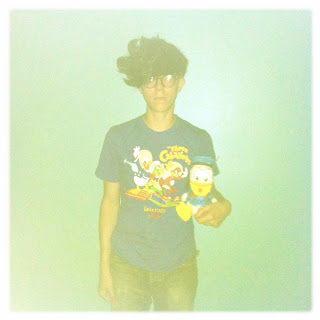 Me with my favorite piece of merch....I honestly just happened
to have the shirt on.  No kidding, it wasnt planned.
Now THIS is some good synergy!  This little guy represents both the movie and the ride...and as a fanatic for old Disney throwbacks I had to have it.   The only problem is that these types of items are few and far between.  I think the company is missing a huge market and opportunity.
Follow us on Instagram, Twitter, Facebook, Youtube.